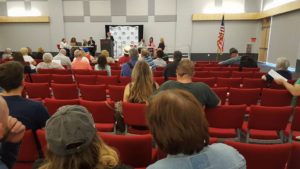 Today the Clark County Democrat Central Committee tried to hold its monthly meeting but not enough people showed up to achieve a quorum. A quorum is the minimum number of voting members that must be in attendance at a meeting for that meeting to be constituted. They held the meeting at the UNLV Union Ballroom. “There is clearly a lack of excitement among Democrats for their candidates and message,” said one person who did not want to be identified.

But the Republican Central Committee was almost full at this month’s meeting. And Adam Laxalt’s annual Basque Fry in Gardnerville attracted over 3,000 people from all over the state.