Democrat State Assembly Speaker, Jason Frierson, was just nominated to become the U.S. Attorney for Southern Nevada. Yes he has been a prosecutor in the Clark County DA’s office, but no, he has zero experience in Federal Criminal Justice. But he’s been a loyal soldier in the Nevada State Assembly as Speaker passing the most extreme laws, including one that protects rapists and sex traffickers. Mind you, combating sex trafficking is a key element of the Federal Criminal Justice system. 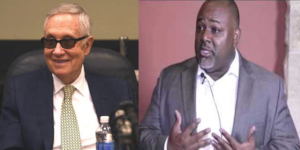 New reforms make Nevada one of the least restrictive states in the nation on abortion while allowing opportune policies for sex traffickers. The majority-female legislature was nothing-less-than negligent in creating abortion loopholes of age concealment and allowing medically unqualified people to perform abortion without penalty.

The law, SB179 “Trust Nevada Women Act” was passed on a near party-line vote under two premises; the guise of getting antiquated regulations off the books and by drumming up fears that a new Supreme Court Justice could overturn the longstanding Roe v Wade ruling.

Lawmakers erroneously presumed that if Roe was overturned there would be a federal abortion ban, putting the competence of our legislature into question. An overturn of the prior decision would give the issue back to the states. This would task our lawmakers with the duty of regulation, to literally do their jobs.

The new law repeals the requirements of a physician to certify in writing that the patient gave their consent freely without coercion and age verification. Worse, the state decriminalized people who are unqualified by state standards to give abortions using medications or instruments and shielded witnesses from testifying about these nearly state-sanctioned, dangerous black-market abortions.

What we are left with is a reform law that is advantageous to sex traffickers operating in our state, unequivocally leaving child sex-abuse victims without any certainty of reporting or rescue all while placating basic medical safety standards by simply looking away.

Now sex traffickers can force their child-victims to lie about their age IF the physician even bothers to ask.  Or they can skip medical qualifications all together and give abortion medication without the advice of a physician or an understanding of risks. Traffickers can perform abortions themselves or hire black-market abortionists without criminality. Children can be given abortions with no guaranteed inquiry, reporting and without fundamental safety protections while witnesses cannot be compelled to testify.

In 2009, the FBI identified Las Vegas as one of the 14 cities with the highest child prostitution rates in the country. This summer, the agency rescued 14 children being trafficked in the city. The US Justice Department mirrors those sentiments deeming it a top destination for human trafficking. According to Las Vegas FBI spokeswoman, Sandy Breault “The local victims were between 14 and 17 years old while all the suspected traffickers were adults.”

The black-market abortion law does nothing to make abortion safer nor to insure any protections of vulnerable children in a sex-trafficking hub.

This legislative disregard of child welfare and a blanket polarization of the hot-button issue lends a culture of complacency toward those who exploit, sell and sexually abuse children. Passing this law in the name of liberation is intellectual laziness leaving horrific implications to sex-trafficked children and overt opportunity to those who benefit from their exploitations.