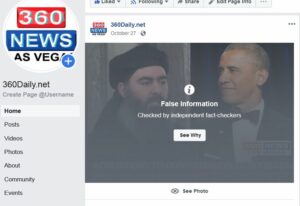 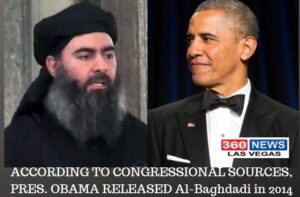 On Oct. 2, 2019 360 News Las Vegas posted a meme on Facebook which said “According to Congressional Sources, Obama released Al-Baghdadi in 2014”. The meme got traction and thousands of people saw it, liked it, shared it and commented on it. The guy who Facebook chose to fact check stories including our meme was former CNN reporter, Alan Duke. Duke claims in his bio, he worked for CNN for ten years covering entertainment and politics.

Duke proceeded to declare our meme misleading and cited Al Jazeera, a Qatar Government owned news outlet who is accused of funding terrorist like Hamas and ISIS by the Saudi Government. Duke then went on to site the Obama’s own State Department as a source. Rule number one in journalism school; you cannot use the subject of a story as your primary source.

Good reporters always challenge government stories because people in government lie, a lot. So when we had a source in Congress that disputed Obama’s assertion stating that he in fact did release Al-Baghdadi, we reported it. That was the point of the meme, that other folks inside the government disputed Obama’s assertion and accused him of lying. The point for us was not whether Obama did or didn’t release Al-Baghdadi; it was that another government source disputed that “FACTS”.

So when FB Fact Checker/ former CNN reporter used Obama himself as his source to claim our meme was false, he lost all credibility. The Fact is, that unnamed government sources are often more reliable than formal government press releases.

But the real issue is that Facebook selects Liberals as fact checkers who are knocking down conservative narratives leaving conservatives without anyway to respond to the fact checkers who act as judge, jury and executioners. Fact checkers are declaring meme’s fake news based on one fact in a meme in order to knock it down, even when that fact is not the many point of the meme.

For example, Facebook Fact Checkers knocked down a meme which states “Elizabeth Warren wants economic equality while she lives in a $5 million house and got a job at Harvard earning $350,000 pretending to be an Indian.” After the fact checker wrote a glowing review of Warren, she then cited Zillow to declare her home was only worth $2 million and blocked the meme. They never addressed her fraudulent use of her genetics to land a job at Harvard. Living in a $2 million home did not change the point of the meme whatsoever.

Fact Checkers cherry picking one number in a story or meme is like your typical grammar Nazi using a misspelled word to discredit an entire story. Instead of addressing the main issue sited in the story or meme they attempt to discredit the writer by finding a minor flaw in the crafting of the story.

When Fact checkers publicly declare a story or meme false and misleading, they risk defaming the news outlet. The comment section is available for all of us to be fact checkers and attack the truthfulness of any story or meme.

The real danger is, letting liberal fact checkers decided what is truth is. Truth is subjective, just ask those who support and dispute Climate Change.

Facebook is truly one of the greatest technological advancements ever created by and for a free society. So it’s imperative that they correct their fact checker polices and allow for back and forth between the post authors and the fact checkers; and let the audience make up their own minds.