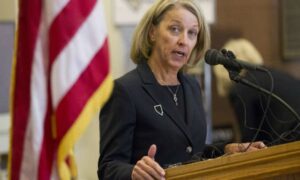 Today, we sit waiting to hear results for some 76,000 votes still uncounted in Nevada. But the Clark County Elections Department issued a notice that they will not release any more vote count data until tomorrow morning. Nevada SOS Barbara Cegavske refuses to enforce the law and compel the transparent vote count now.

Cegavske sided with the Democrats when President Trump and the NV GOP sued last week asking for poll workers to simply have access to watch the vote count. Cegavske fought the President when he sued back in August to stop the Democrat mail in ballot scheme.

But she surrendered to the ACLU when they sued to compel the state to allow non-citizens who register to vote at the DMV to transmit those voter applications to election departments.

Cegavske has refused to investigate Dems who don’t live in the district.

Cegavske allowed folks to vote twice without prosecution back in 2018 voiding an entire election.

Cegavske went along with the Governor’s request in March to hold a mail in ballot in the primary where the Dems perfected their election rip off scheme.

At every turn over the past few years, Cegavske has betrayed her voters, betrayed her oath and betrayed the President. I am calling on Barbara Cegavske to resign immediately. Cegavske has failed to protect election integrity, period!