Michael Savage Show is reporting Vice President Mike Pence’s security detail shot and killed 14 year Air Force Veteran Ashli Babbitt in the Capital Riots last Wednesday. The case is under investigation and as usual the FBI and other law enforcement agencies are not refusing talking about right now.

One person is shown sticking their gun out from a side room and shooting the unarmed woman in the chest. Ahsli  Babbitt falls back and appears to bleed out on the ground with little help from police on the scenes. 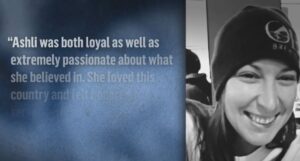