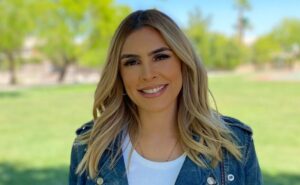 Carolina describes herself as “Carolina is a proud Colombian American and the youngest of four kids. She was born in the US and spent her formative years between the US and Colombia. She came to Las Vegas in early 2003, where the whole Serrano family transplanted to Nevada and has called the silver state home for almost 20 years.

“I want the wall, freedom, and America First values in Washington D.C.”