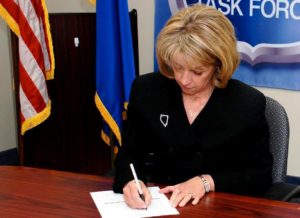 360 has learned that Sec. Cegavske, just last month in March, signed off on a Memorandum of Understanding in response to a lawsuit filed by the Las Vegas ACLU and Mi Familia Vota Education Fund to enforce the National Voter Registration Act of 1993 (NVRA).

The Department is one of several pass-through organizations in the state that accepts voter registration applications in accordance with the National Voter Registration Act (NVRA) of 1993. The NVRA, commonly referred to as the federal Motor Voter Law, requires each state’s motor vehicle driver’s license application and/or renewal to also serve as a simultaneous voter registration application. When the DMV receives an application from a customer, it is then transmitted to the appropriate agency, most often a county clerk or registrar’s office, for processing. These locations serve under the Secretary of State’s Office as the officials responsible for determining eligibility and processing voter applications.

In March, Demos announced the finalization of a Memorandum of Understanding (MOU) signed in cooperation with the DMV as well as the Secretary of State’s Office to ensure practices align in accordance with Federal guidelines. In that MOU, it states, “The DMV shall provide the appropriate Clerk/Registrar all Voter Registration Applications returned by customers without regard to their completeness.” Per the NVRA, the only reason the DMV or any pass through agency can refuse an application is due to a lack of signature.