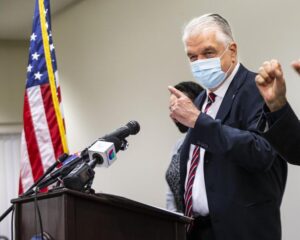 According to reports, Perkin’s partner, Mike Willden, a former director of the Nevada Department of Health and Human Services called the Governor’s office to help get Northshore’s lab testing licenses expedited. Willden lobbied Sisolak’s chief of staff, Yvanna Cancela, who pressured the director of the state’s pandemic response, who pressured the head of the state’s licensing bureau, Cody Phinney. She in turn moved up its inspection of Northshore’s Nevada headquarters in Las Vegas over the objections of Inspector Bradley Waples. Waples claims he was allegedly pressured to move Northshore to the head of the line under protest.

Following Northshore’s approval, Nevada government agencies including the Nevada Universities, public schools and Government employees were required to get weekly CV testing. Governor Sisolak then required regular testing for student-athletes, coaches and others participating in school activities. Vaccine mandates required unvaccinated employees across the state to get tested weekly.

Northshore all of a sudden had thousands of new customers who needed weekly testing even without a surge of infections. And for each person, Northshore was paid by the Feds $165 and $260 for administering the two tests claiming they were uninsured. Northshore pocketed $165 Million according to federal reports.

But Northshore’s testing results at the University of Nevada Reno drew the attention of the Director of the student health center, Dr. Cheryl Hug-English who ran her own investigation into Northshore testing with the state lab. And she discovered that more than 96% of the PCR results from the Nevada State lab that came back positive, Northshore reported as negative.

According to a May 17th email obtained by ProPublica, Federal Special Agent Peter Theiler with the Inspector General’s Office of the U.S. Department of Health and Human Services said he plans to subpoena documents from Northshore, Nevada health officials and from Governor Sisolak.

Yet a Google search of Northshore and Sisolak shows not one of our local news outlets is reporting that Sisolak is also under Federal investigated and that documents from his office are being requested under threat of subpoenaed. No word yet if a Federal Grand Jury has been opened. Can we trust the Biden DOJ to investigate Democrat Gov. Steve Sisolak?

Sisolak spokesperson, Meghin Delaney, has denied that Governor Sisolak had any conversations with the Palivos family about Northshore’s operations, but the records reflect his chief of staff Yvanna Cancela helped push their licensing through state regulators. Meghin Delaney went on to say the state won’t need to be compelled to aid the investigation.

“We’re not going to need a subpoena to cooperate,” she said. “Clearly complying with this federal investigation is important on our end.”

“Sisolak’s friends made millions and we paid the price,” said Clark County Sheriff Joe Lombardo, one of 10 GOP contenders in the primary for governor.

“Sisolak better lawyer up. I have been saying the tests were fraudulent for months and was called a conspiracy nut by Sisolak and Ralston” said Joey Gilbert, Nevada Attorney and Republican Candidate for Governor.

But many Nevadans have real questions about whether they can trust Democrat Attorney General Aaron Ford to investigate his friend and political ally Nevada Governor Steve Sisolak? Even Tisha Black, who’s running on the Republican ticket for Attorney General seems to be conflicted out of any possible Sisolak investigation. And then there is the newly crowned U.S. Attorney for Southern Nevada, Jason Frierson, the former (D) Assembly Speaker and a close political ally of Sisolak. Enter Sigal Chattah.

“It’s clear that neither ⁦‪AG Ford or the new USA Frierson will prosecute these players. Nor will ⁦‪Tisha Black‬⁩ who’s #SisolaksChoice and plays in his sandbox. I’m the ONLY AG that’ll issue the Marcum Notices by the dozen on this. Time to end #PublicCorruption in Nevada.”

And last night at the NVGOP First Friday event Sigal went even further. (start video at 2:34)