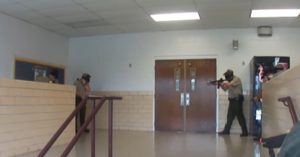 As Nevada Democrats vote for more and more gun control targeting law abiding citizens, at the same time they just gutted some $30 million from school safe funding. Funding going to support infrastructure and school police. After numerous school shooting across the country exposed Clark County Schools as wide open to attacks, many leaders called to more funding to harden schools security. Many of Clark county Public Schools lack even basic security and are literally wide open to the public. The bill would have provided funding to secure those older schools.

Senator Ben Kieckefer expressed shock and dismay at the budget cuts “The idea that they just backed out $30 million that was directed to doing that is really unfathomable to me”.

Governor Sisolak called for over $54 million for improved school safety, but Democrats in his own party slashed his budget.

Instead Democrats will use the money to fund English as a second language or zoom schools for Non-English learners.