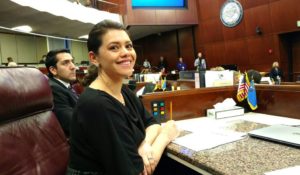 Ironically it’s been mostly Democrat lawmakers who’ve either stepped down, resigned or have been forced out of office as a result of sexual harassment claims, including Las Vegas City Councilman Steve Seroka, Democrat and Majority Whip, Assemblymen Mark Sprinkle, former Congressman and Nevada State Senator Ruben Kihuen and others in the last session.

Carson City, Assembly Majority Leader Teresa Benitez-Thompson introduced AB397 which would allow government officials to be impeached for sexual harassment and hold them personally liable for any lawsuits that may result.

If AB397 passes, it would empower the Nevada Equal Rights Commission to investigate elected officials like County Sheriffs and refer them to the State Assembly for impeachment or to a local county grand jury. The bill goes one step further and would allow any civil lawsuit brought against the government for the sexual harassment to also be brought against the public official personally. But the Democrat lawmaker excluded herself and her colleges in the Nevada legislature from the law including shielding them from any personal financial liable.

3.  Any damages assessed against an elected official or a district, county, township or municipal officer pursuant to this chapter must be assessed against such
official or officer in his or her personal capacity, and may not be paid with public money or contributions received pursuant to chapter 294A of NRS.
4.  As used in this section:
(a) “District, county, township or municipal officer” does not include:
(1) A justice or judge of the court system; and
(2) A State Legislator removable from office only through expulsion by the State Legislator’s own House pursuant to Section 6 of Article 4 of the Nevada Constitution.