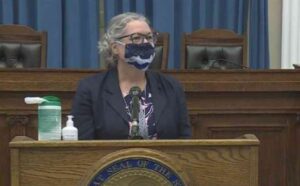 After two months without any official leadership at DETR, with thousands of folks still waiting for their first dollar of help, after losing a lawsuit filed by Nevadans in need of unemployment, after 2 previous directors were forced out, Sisolak finally names his 3rd DETR Director in 5 months.

Barbara Buckley is an attorney and Democratic Party politician who served as a member of the Nevada Assembly, representing Clark County District 8 from 1994 to 2011. She served as Assembly Speaker from 2007 to 2011

Republicans in the Assembly wrote a letter demanding action but didn’t do much beyond that.