NV DEMS VOTE TO CONCEAL THEIR PERSONAL GOV. FUNDED PENSIONS FROM THE PUBLIC

NV DEMS VOTE TO CONCEAL THEIR PERSONAL GOV. FUNDED PENSIONS FROM THE PUBLIC 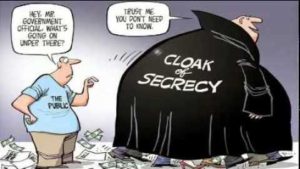 Today in Carson City, 11 Democrat Nevada state senators — most of whom are PERS members themselves — just passed a completely unenforceable law aimed at making private their taxpayer-funded pensions.

Such a singular focus on keeping the public in the dark, and perhaps a lack of proper understanding of the subject matter, resulted in language that plainly states the names of all public employees in Nevada would be confidential under the just-passed SB384.

Passing laws that place every Nevada government in a continual state of lawbreaking and, thus, subject to legal action, is bad policy.

“In their zeal to place the public pension system — not to mention their very own pensions — under a shroud of secrecy, Nevada senators have just passed a bill that would place an unenforceable requirement on every government agency,” explained Nevada Policy Research Institute Transparency Director Robert Fellner.

10 senators — all 9 Republicans and Democratic state Senator Nicole Cannizzaro — stood up for transparent government and sound policymaking by voting against SB384 today.

“NPRI applauds the Republican caucus and Senator Cannizzaro for supporting the principles of a transparent and accountable government,” commented Fellner. “But, unfortunately, it wasn’t enough to keep this blatant affront to transparency from moving forward.”

If SB384 passes the Assembly and is not vetoed by the Governor, Nevada will have undone the will of multiple legislative bodies who fought for a transparent and accountable government.

“Unfortunately, the law was so poorly written, it goes even further,” explained Fellner. “This vote shows just how blindly focused on reducing transparency many of our elected representatives seem to be.

“Does this Legislature really want to reverse Nevada’s history of bipartisan agreement on the importance of a transparent and accountable government, particularly for a bill that was rammed through the Senate on the narrowest of margins, and is based entirely on a claim that is demonstrably false? Especially given the blatant conflict of interest illustrated by the fact that almost all of the 11 senators who voted in favor of SB384 are PERS members themselves.”

Robert Fellner of NPRI provided the content for this article.