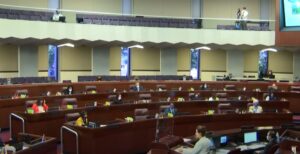 As the state faces near financial collapse following the CV19 business shut down (still ongoing), Gov. Sisolak has called a special session to raise taxes and cut government salaries. The session is set to start today in Carson City. But the Legislative Director has banned (for CV19) the public, including independent reporters, lobbyists and the general public from the state government building for the special session. The Director works at the pleasure of the majority, Nevada Senate Majority Leader, Democrat Senator Nicole J. Cannizzaro.

Senate Majority Leader, Democrat Senator Nicole J. Cannizzaro has fully supported banning the public including reporters as the session focused on raising taxes. BTW none of the Democrats law makers have objected publicly to banning the public and independent reporters either.

Only insider lib reporters who are members of the Nevada Press Associations are allowed in the building during the session. The public ban was announced on June 26, 2020, and to date Sen. Nicole J. Cannizzaro has refused to denounce it.

You can watch the session here: