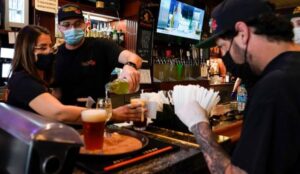 Last week an unidentified man was arrested after refusing to wear a mask at a Casino Bar. But he was technically arrested for trespassing, not for violating Sisolak’s mask mandate. The local was arrested for “trespassing” Saturday, July 4, after he allegedly refrained from putting on a facial covering while sitting at a bar at the Hard Rock Hotel & Casino Lake Tahoe.

The Douglas County Sheriff’s office told 360 that the man was arrested by the Casino for trespassing not for wearing a mask. They are required by law to book people arrested by private citizens and let the courts handle it form there. Bail is $180 for trespassing, a misdemeanor.  The Douglas County Sheriff’s Office put out a statement last week stating they would not arrest anyone for not wearing masks.

As reported by the Record-Courier:

A Ruhenstroth man, who tested a State line casino’s resolve to require masks, was ordered to wear one after he was taken into custody for trespassing on Saturday.

The 32-year-old was sitting at the bar at the Hard Rock around 2 a.m. July Fourth without a mask when security advised him to put on a mask or leave the casino floor, according to the Douglas County Nevada Sheriff’s report.

The man refused to wear a mask or leave the casino, security officers told deputies. After being asked several more times, he was taken into custody by security for trespassing.

Later this weekend, the man appeared before Stateline’s Tahoe Justice Court where Justice of the Peace Richard Glasson ordered him to wear a mask or another facial covering approved by Nevada or California authorities, the Record-Courier reported.

The defendant was also ordered to stay out of the casino. He was released on his own recognizance pending trial.