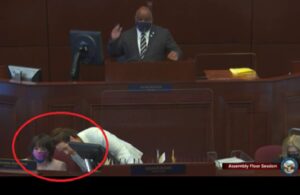 After Repub Assemblywoman Annie Black was cancelled by the Democrats and barred from speaking and voting for daring to remove her mask after the CDC gave the all clear, a violation of the Nevada State Constitution requiring a 2/3’s vote expelling a member, folks went back through the videos of the Nevada Assembly and found some juicy pictures. 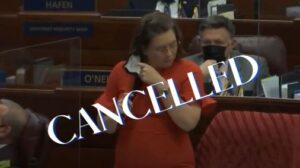 On Wednesday, April 14, it was announced by LCB that the Legislature would be semi-re-opened to the public under relaxed COVID restrictions.  So I pasted a tongue-in-cheek sign on my office door the next day reading…

Susan Furlong, Chief Clerk of the Assembly, had a cow and instructed the Sergeant at Arms to take the sign off my door, claiming “it violated Assembly Standing Rule 150.”

BUT, Susan Furlong, The Democrats’ Chief Clerk of the Assembly barely ever wore her mask in the well of the Nevada State Assembly since February without any drama from the Democrat Mask Nazis. Here is just a small number of pictures of Susan Furlong maskless on the Assembly Floor, even one of her not social distancing whispering in a colleague’s ear without a mask.