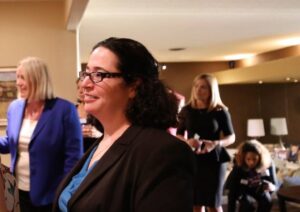 Dem Assemblywoman Lesley Cohen’s history of defending child rapists and child traffickers goes all the way back to 2013 when she first served in the Nevada State Legislature. Cohen, a criminal defense lawyer, who’s firm’s website brags about their success rate of putting child rapists and traffickers back on the streets, was one of a hand full of lawmakers who voted against SB 243. 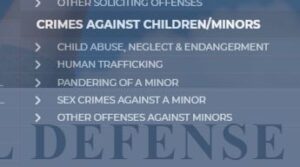 As noted below, SB 243 requires DNA samples to be taken from all felons, because most child rapists and traffickers have multiple victims, sometimes in different counties and different states. Since the law passed in 2013, many cold case murders and rapes have been solved. So Cohen’s vote against SB 243 literally protected the worst of the worst in a truly cynical display of self-interest.

But wait there’s more. Cohen voted for SB179, The Child Rapist Protection Act of 2019. The bill protects any adult who helps a minor get an abortion, even their abuser or pimp. Yep, SB 179 protects traffickers who force their victims to get abortions after they raped them or pimped them out. When a pimp takes the minor to get an abortion, SB 179 protects him from prosecution and lets him dispose of the evidence of his crime. The law forbids the DA from forcing the abortion staff and doctors from testifying against the pimp or abuser. The pimp could actually force his victim to take an abortion pill or perform the abortion himself and not be charged. It allows trafficking victims to be forced to lie about their age without verification

But Cohen isn’t all bad. She brags on her website about her love for cats.

SB 243 – which Requires DNA Samples for Felonies, like child rapists and human traffickers.

Vote to pass a bill that requires a law enforcement agency to take DNA samples from individuals charged with felonies.

SB179 Child rapist protection act
AN ACT relating to abortions; revising provisions relating to informed consent to an abortion; repealing criminal penalties on certain actions relating to the termination of a pregnancy; repealing the prohibition on the excusal of a person on certain grounds from testifying as a witness in a prosecution relating to the termination of a pregnancy; and providing other matters properly relating thereto. Legislative Counsel’s Digest: Existing law in NRS 442.250 regulates the medical conditions under which abortions may be performed in this State. Because NRS 442.250 was submitted to
and approved by a referendum of the voters at the 1990 general election,
Section 1 of Article 19 of the Nevada Constitution dictates that the provisions of NRS 442.250 may not be amended, annulled, repealed, set aside, suspended or in any way made inoperative except by the direct vote of the people. In addition to the provisions of NRS 442.250, Nevada’s abortion laws also contain certain requirements for informed consent to an abortion. (NRS 442.253) Because the requirements concerning informed consent were not part of the referendum in 1990, they may be amended or repealed by the Legislature without being approved by the direct vote of the people.
This bill revises the requirements in existing law relating to informed consent. This bill conforms with
Section 1 of Article 19 of the Nevada Constitution because this bill does not amend, annul, repeal, set aside, suspend or in any way make inoperative the provisions of NRS 442.250. Instead, this bill serves a different governmental purpose than the provisions of NRS 442.250 and revises laws that are separate and complete by themselves and are not amendatory of the provisions of
NRS 442.250. (Matthews v. State ex rel. Nev. Tax Comm’n, 83 Nev. 266, 267-69 (1967))
Existing law requires a physician to certify in writing that a woman gave her informed written consent before performing an abortion
in this State. Existing law additionally requires a physician to certify in writing the pregnant woman’s marital status and age before performing an abortion. (NRS 442.252) Existing law further requires that an attending physician or a person meeting the qualifications adopted by the Division of Public and Behavioral Health of the Department of Health and Human Services: (1) take certain action to notify a pregnant woman that she is
pregnant; (2) inform a pregnant woman of the number of weeks which have elapsed from the probable time of conception; and (3) explain the physical and emotional implications of having the abortion. (NRS 442.253)
Sections 1 and 2 of this bill revise the requirements for informed consent for an abortion. Section 1 removes the requirement that a physician certify a pregnant woman’s marital status and age before performing an abortion.