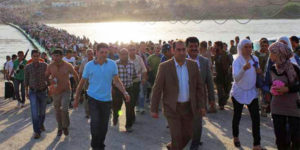 Since the Orlando night club shooting just last weekend, the Obama administration has admitted another 441 Syrian Muslim refugees into the US. The Obama Administration failed to properly screen the Orlando shooter even after local police reported him to the FBI. The US has no possible way to screen the 441 new refugees according to the FBI. But Paul Ryan and Obama continue to import hundreds of thousands of Muslims that other Muslim middle eastern nations don’t want.