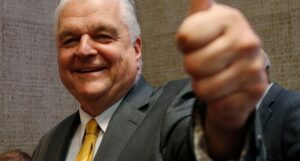 Governor Sisolak’s vaccine mandates do not apply to his own staff according to an open records request 360 News served his office. In documents obtained by 360 News Las Vegas, some of Sisolak’s direct staff in Carson City and in Las Vegas are not vaccinated. Sisolak claimed their reasons for not being vaccinated are confidential.

“Employee names and other identifying information have been redacted pursuant to NAC 284.718(1)(j)(10), which declares confidential all records related to a state employee’s health or medical condition.”

Sisolak’s administration has made vaccine mandates a corner stone of their CV19 policy over the objections of hundreds of thousands of Nevadans. Thousands have taken to the streets to protest Sisolak’s vaccine mandates.His office refused to disclose their names or reasons for not being vaccinated. Sisolak is even defending his mandates in court and refusing to accept religious and medical exemptions.

“Sisolak once again has exempted himself from his own polices. His hypocrisy knows no bounds.”

“Steve Sisolak is the modern D.C. woke Democratic Party.  Do as I say, not as I do.  He wants to mandate vaccines on our teachers, our children, and our small business owners…but not his own political staffers.  That’s the key difference between me and the other Republicans running for Governor.  Over the weekend on the Sam Shad Show, Joe Lombardo said he plans to listen to the same advisors Steve Sisolak does…my administration will be a 180 degree turn back toward freedom”