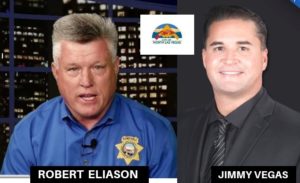 The Nevada Secretary of State issued the following statement: “as part of our investigation into this matter, Mr. Vega voluntarily provided to the Secretary of State’s office a copy of a residential lease agreement he signed on December 1, 2017, for a property in North Las Vegas (1368 Journey Way). This lease agreement clearly establishes that Mr. Vega met the minimum 30-day residency requirement found in NRS 293.1755. Accordingly, no action will be taken by this office against Mr. Vega, and this complaint file will be closed.

Mr. Vega issued the following statement “My opponent, Robert Ellison, has a history of misleading our community and using his political connections. He will say anything to get elected, including lies about me, my family, and my record. There is a reason our Mayor John Lee, law enforcement, Fire, and many others have endorsed my campaign – because the corruption needs to stop. I Will bring integrity and honesty to this office.”

Vegas went on to say “He is misleading, cheating and risking the safety of our community simply by running for Constable again, all for his own personal financial gain. Nevada law states you must have at least a Nevada Category 2 post certification to be qualified to hold this office. He failed out of the academy on day one and therefore is not qualified.”