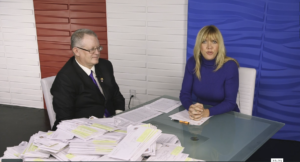 According to unnamed sources, Republican Assembly Candidate Stan Vaughan, who appeared in NEWSMAXTV LAS VEGAS’s studio with Megan Barth of ReaganBaby.com this week with 9,200 letters returned by the post office marked as either deceased, a vacate lot, or no person by that name, met with Federal criminal investigators today. According to those same sources, the investigators took possession of the physical evidence and are initiating a criminal investigation.

According to Mr. Vaughan and an email he provide NEWSMAXTV LAS VEGAS, he informed the Nevada Secretary of State’s office on November 12, 2016 of the 9,200 returned active voter letters, but they never followed up. According to the spokesperson for the Nevada Secretary of State’s office, who responded to NEWSMAXTV LAS VEGAS today stating”

“Mr. Vaughan’s e-mail was acknowledged as received as routine procedure within the Election Division. The claim of “9000 USPS certified yellow label returns” was unclear.  There was no indication of what these returns were, or what mailing list was used to address them. “

But according to Mr. Vaughan’s email back on November 12 2016, the SOS said ” We are forwarding your email to the appropriate person for response.” No response ever came according to both Mr. Vaughan and the Spokesperson.