TRUMP’S CARRIER DEAL IS GREAT NEWS FOR WORKERS AND FOR TAXPAYERS:ECONOMIC NATIONALISM IN ACTION 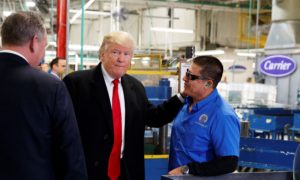 This week President Elect Donald Trump announced he had struck a deal with Carrier to keep its factory open in the US by giving the company a $7 million tax credits spread over 10 years. Putting aside the huge benefits to US taxpayers, the deal is a lifesaver for workers, their children and their community.

This isn’t some spec business from China proposing to build a factory in the desert, but a company that has been around for a generation. Willis Carrier is credited with inventing modern air conditioning in 1902 and in 1915 founded Carrier. Its an American icon.

Trump gave Carrier $7 million in tax credits spread over 10 years if they stay. If Carrier leaves, assume about 200 workers will take early retirement or find new jobs and 800 of the workers will ended up on unemployment, costing about $1,600 per month each or $19 million per year plus another $20 million to retrain them and find new jobs, likely at lower salaries. But those same 1,000 workers staying on the job at $25 per hour, will pay on average $5,000 per year in federal income taxes over the same 10 year period equaling $50 million. Donald Trump just bought $50 million worth of federal income taxes with $7 million in tax credits. That does not take into account all the local businesses that will continue to be supported by the workers in their communities and the homes they will purchase or continue to afford to pay their mortgages.

Now imagine if we can do the same thing for every business in the US by lowering the corporate tax rate down to 15% and eliminate Obamacare. The reality that so many people refuse to acknowledge is that our nation must compete for jobs with the rest of the world. We need to compete by lowering taxes, reducing barriers to competition by eliminating regulations and yes having an educated work force. Our country has failed by all of those standards our the past 15 years and its why we see cities like Detroit turned to wastelands.

Let’s turn it around, if our nation sends out people all around the world to offer tax credits to big factories if they would move to the US, resulting in a million new $25 per hour jobs, generating a 7 to 1 return in revenue to the US government, that would pay off our national deficit. Or in other words the US government would get $50 Billion in new federal income taxes in return for $7 billion in tax credits spread over ten years .

Keep in mind, loosing 7 million manufacturing jobs over the last 20 years has had the opposite effect of loosing the US coffers $700 Billion in revenue, destroying lives and devastating communities.

If you add other economic multipliers to the fiscal impact, like paying out unemployment, welfare, loss of social security revenue etc, the numbers would triple.

The Carrier deal is an example of Trump’s Economic Nationalism in action, where our leaders compete directly with foreign countries for jobs and industries.

The fact is Mexico, China and other nations are offering crony capitalism deals to companies like Carrier to move to their countries, so should we do nothing and let them move? Real macroeconomic reforms are going to take 5 or 10 years to fully implement. To all those who want to sit on their high horse and whine about crony capitalism or social justice, Donald Trump just saved real jobs and he delivered $50 million to the US taxpayers at a cost of $7 million in tax credits, tax credits we wouldn’t have to offer if the jobs had left.