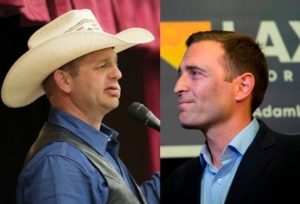 Early in 2018, I had the opportunity to interview Cliven Bundy right after he got out of jail following Federal charges dropped. After that I interviewed Ryan Bundy the day he filed to run for Governor of Nevada. In fact, I have interviewed Ryan several times over the course the of 2018 election cycle. As a Political Journalist, I spend a lot of time on the phone talking to all kinds of people on all sides.

Many in the Republican camp are deathly afraid that Ryan is going to siphon off just enough votes to help Sisolak win. Ryan has about 80% name ID in Nevada and many people in rural Nevada love him. In fact, Ron Paul just came out and endorsed Ryan adding to his momentum. I am only now telling my story because Ryan publicly commented about it in the Reno Gazette newspaper this week. One day while on the phone with Ryan, I asked him if he would ever consider stepping aside in the Governor’s race. I mentioned to him some Republicans wanted him to meet with Adam Laxalt and work out their differences. I wasn’t interested in being a deal maker; I just thought it was an interesting topic for a story I was exploring.

Ryan Bundy spent two long years in federal jail without being convicted of anything awaiting trial. Ryan felt Nevada Attorney General Adam Laxalt failed to help him and his family at the standoff and then failed to help them while they sat in jail for two years. As Ryan said “Adam didn’t raise a finger to help us.” So obviously Ryan feels very strongly that both the Nevada AG and Governor should defend the citizens of Nevada against the Federal Government when it overreaches and abuses it’s power.

Ryan told me he would consider stepping aside if Laxalt would come to his house, sit down and talk with him man to man. Ryan wanted an apology from Laxalt for not helping them. But more importantly Ryan wanted assurances that Laxalt would protect and defend the interests and rights of all the people of Nevada if he was elected Governor. Ryan didn’t want a job or money. Ryan deeply cares about the issues.

So I asked several people close to Laxalt, including a few powerful elected Republican officials, if Laxalt would consider meeting with Ryan, hearing him out and maybe apologize? This was back in July. To date, neither me nor Ryan have ever heard a drop from Laxalt or his people expressing any interest in a meeting of any kind.

So here we are, two weeks away from early voting in October and Laxalt is down in the polls and could lose. But Laxalt refuses to give an inch and meet with Ryan. In the latest poll, Ryan is pulling five points. Five points could be the difference between Governor Laxalt and Governor Sisolak. At this point if Laxalt loses it will be his own fault for failing to meet with Ryan and showing Ryan’s supporters the respect they demand and deserve.