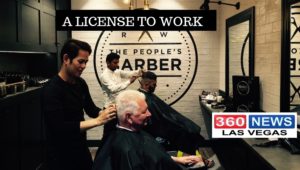 The State of Nevada regularly presents itself to the world as a place where government is less overbearing and regulation-obsessed than most.

But how true is that?

The Governor’s Office of Economic Development, for example, touts Nevada as “A very business-friendly state, with state and local governments committed to streamlining approval processes and remaining a very low-regulation environment.”

However, when lower-income Nevadans seek to work or start a business in several Silver State industries, they actually face some of the highest regulatory obstacles in the country.

Moreover, the primary purpose of those obstacles — evidence strongly suggests — is not to protect the public, but instead protect politically favored insiders from potential competitors.

An “occupational license,” simply stated, is government permission to work in a particular field. And of all American states, Nevada has the second-highest proportion of citizens licensed by the state to work in their fields. Only Iowa has a higher percentage, according to a 2016 study jointly produced by the Obama administration’s Council of Economic Advisers and Treasury and Labor departments.

Proportion of low-income citizens licensed is an important statistic: The more that states like Nevada require licenses in lower-income occupations, the more those states discourage low-income entrepreneurship.

This was clearly documented recently in an important 2015 study that matched different data sets from the Ewing Marion Kaufman Foundation and the Institute for Justice:

Thus, the states’ reflexive imposition of occupational licensing   —  supposedly to “protect” the public, but often actually in service to political cronyism   — is stifling entrepreneurship in America.

In the 1950s, only one in 20 U.S. workers needed the government’s permission to pursue their chosen occupation. Today, that figure stands at almost one in three.

Near the top of the list of burdensome states is Nevada, ranked the third most burdensome in a study conducted by the Institute for Justice. A common pattern   —  which the Silver State adheres to   — is for states to impose restrictive conditions before licenses are granted, such as completing a certain amount of education, paying fees or passing exams.

However, those conditions frequently have an implicitly discriminative tendency. As the Obama administration study found, “The costs of licensing fall disproportionately on certain populations.”

The groups listed as hardest hit were military spouses, immigrants, and those with a past criminal conviction who have served their time and seek to re-enter society.

Part of the problem is that licensing boards are frequently made up of industry insiders who have a direct interest in controlling the available supply of providers of goods and services in their industries. Perhaps because of this, Nevada’s licensing requirements appear frequently designed to require entrants to either take on staggering debt or give up altogether on entering the field.

Here in Nevada, that seems to be the case for the occupations of Interior Designer, Travel Guide, Cosmetologist and Athletic Trainer:

Alternatively, some occupations where human health and safety is a major consideration have surprisingly light requirements:

Many state licensing boards are given discretion in the statutes based on vague “morality” clauses, by which they can exclude people on the basis of some irrelevant aspect of their life deemed “immoral” by the members of the board.

The Obama administration study included a set of “Best Practices” for policy makers. These recommendations include:

Some industries have harsher requirements than others. Future reports will take a deeper look into specific fields to show the harm being done by their respective licensing requirements.