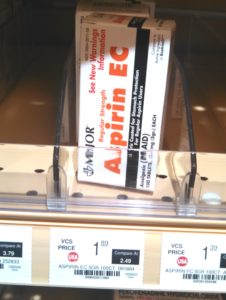 ACTUAL PICTURE OF ASPIRIN AT VA RETAIL STORE FOR SALE FOR $1.89 COMPARED TO $15 THE VA CHARGES VETERANS WHO ORDER IT ACROSS THE HALLWAY AT THE VA PHARMACY

Under a new three tier program, the VA “CO-PAYMENT” equates to a markup of over 700% for a bottle of Aspirin. Is this what Congress had in mind? Did Congress approve ripping off Veterans? As of Feb 27, 2017, the VA rolled out new regulations that require Veterans pay copayments for non-service connected medications. The new regulations are the witchcraft brew of bureaucrats like our local leadership, who’ve never served in the military. There are over 18.8 million Veterans the VA is responsible for.

The VA is putting the squeeze on Veterans once again by requiring them pay at least a $5 copayment for generic drugs.  The VA requires Veterans in tier 1 to pay a $15 for the co-pay for a 3 month supply of aspirin for heart treatment. The same bottle of aspirin in the VA hospital retail store, off the shelf, costs $1.89. That’s the retail price, not wholesale.

The VA charges Veterans a $5 co-payment for these drugs. Remember the prices below are the retail prices not wholesale prices. The VA is not supposed to be making a profit off sick Veterans’ drugs.

These new drug price gouging revelations comes on the heels of a recent story 360Daily.net did on Memorial Day last week about the VA dumping patients into private hospital emergency rooms than sticking the Hospitals and Doctors with the bills.

$5 may not seem like much until you consider many sick veterans are living on $800 per month. So for the VA to profit up to 700% off sick Veterans is one more slap in the face of those who gave their all for this country. Co-payments should be capped at a certain percentage of the VA’s wholesale price and not a profit center for the VA at the expense of sick veterans.

360Daily.net did ask the Southern Nevada Veterans Administration Leadership for comment. Career bureaucrat, Southern Nevada Director Peggy W. Kearns could find time to address price gouging Veterans. One of communications personnel did email us the new regulations expecting us to accept them as if they were the Ten Commandments from GOD.