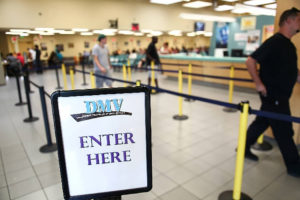 Recently “Moderate Republicans” in Nevada have been defending their support for providing driver’s licenses to illegal aliens. Their arguments in favor of this de facto citizenship give away miss the point entirely.

Their argument goes something like this; Illegal Aliens are here and they are driving cars already so at least if we give them a license we know who they are and can make sure they have insurance.

Nevada state law says that “a person shall not drive any motor vehicle upon a highway in this State unless such person has a valid license as a driver . . . .”

The crime of driving without a license is a misdemeanor in Nevada. A conviction in Las Vegas carries the following punishment:

There are lots of American citizens who break this law for various reasons and they are jailed and or fined thousands of dollars every day in traffic courts. Where’s their sanctuary?

The Conservative solution to the problem of illegal aliens driving on our highways without a valid driver’s license is very simple. If the State Legislature made it a felony to drive in the State for people who are also illegally here with a mandatory sentence of 3 years in prison, then followed by immediate deportation and we enforced this law, the problem would go away very fast. It’s called deterrence.

But Moderates Republicans and Democrats don’t want the problem to go away. The Democrats want new voters and Moderate Republicans want the cheap labor.

The Trump administration has been strictly enforcing the immigration laws since taking office in January of this year and publically deporting thousands across the country. This has had a huge deterrent effect on those in South America considering coming to the U.S. illegally.

It can cost a Mexican thousands of dollars to pay a human smuggler to get them across the U.S. border. So if they fear the U.S. government will deport them if they get caught, then the benefits of illegally crossing the border far outweigh the benefits, risks, and costs.

But there’s also another side to this issue. By giving driver’s licenses to illegal aliens they can and have used them to illegally register to vote. The licenses are used to obtain state welfare benefits. And frankly, it has become de facto citizenship. In fact, according to Clark County Sheriff Joe Lombardo, he will not turn illegal aliens over to ICE if they possess a Nevada driver’s license for simple traffic tickets.

The main issue for Conservatives is; we the citizens, through our government, get to decide who comes into the U.S. and who doesn’t. The purpose of giving government power is to protect our liberty, our property and our sovereignty.

Most Republicans want our national sovereignty defended, our borders enforced, and our laws upheld. Giving drivers licenses to illegal aliens is amnesty that wipes out our borders, adds to our dependent class of poor and creates more Democrat voters. You cannot claim to be against sanctuary cities while supporting driver’s licenses for illegal aliens. By definition, you are providing sanctuary by providing drivers licenses to people who should not be in the U.S. in the first place.