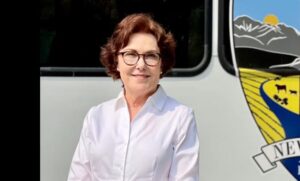 Sen. Rosen had no clue what I was talking about and ran away with a fleeting “No Comment” then I was blocked by her staff from further questions. As Rosen ran away I asked her to confirm that she wanted me to report that she had “No Comment”. So to me surprise, two minutes later she turned around and came back to me, stood face to face with me and said “I have retired Marines on my staff so my heart goes out to those who died today. My office is working around the clock to help get people out of Afghanistan”. Then Rosen walked away when I asked if she supports Biden’s Afghan policy so far?

Frankly, I blame her staff. How could they let her go to a public event with news crews and not text her a heads up?

What was even more shocking to me was the 10 plus “reporters” and camera crews at the event, and not one asked the US Senator about Afghanistan except me.

BTW Pres. Biden is refusing to hold a presser about today’s events.

NV U.S. Senator Rosen issued this statement immediately following her interview with me.