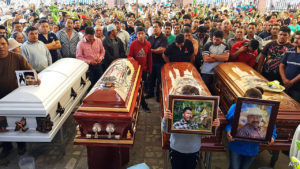 As Mexico’s national elections are fast approaching this weekend, a sinister plot is emerging, posing a real and present danger to the U.S. Over 133 politicians running for various positions across Mexico have been murdered by drug cartels. Some 30,000 people were killed in Mexico in 2017. Mexico is in the throes of a full-fledged civil war.

The Cartels have gain power though drug and human trafficking to the U.S. and across the world. Worldwide profits have made Mexican Drug Cartel bosses billionaires many times over. Joaquín “El Chapo” Guzmán, a Mexican drug lord who headed the Sinaloa Cartel, currently in U.S. custody awaiting trial in New York, has an estimated net worth of $4 billion.

We are on the verge of seeing a major Mexican Drug Cartel take control of the country, its military and its institutions. Imagine if the Democrats started killing hundreds of Republican opponents running for Congress and other offices.

Fernando Puron, a Congressional Candidate in the border city of Piedras Negras, was taking a selfie with a supporter when a gunman shot him in the head from behind.

Mexico is on the verge of becoming a Drug Cartel Super State and no one in the U.S. government knows what do to. From drug and human trafficking to control over banking and the courts, the Cartel is poised to control every aspect of life in Mexico and along the U.S. border. If the Cartel seizes power we could see a Holocaust next door in Mexico as the Cartel attempts to wipe out all opposition by killing tens of thousands of people.

The current crisis in Mexico may motivate more members in the U.S. Congress to support President Trump’s border wall, but the U.S. may need to militarize the border and even intervene as it did in Panama to restore law and order. Other options may include supporting a Mexican Military coup.

The Las Vegas market is a major Mexican Drug Cartel hub. And Las Vegas has seen a huge spike in gang killings in recent years. Just this year, LVMPD reported MS 13 gang members were arrested for killing some 10 people and barring them in the desert. 2016 saw an 80% spike in murders in Clark County.

According to a Metro Police source, “The spike in murders in Clark County is directly connected to gangs competing for drug turf.”

Mexican immigration is at the center of the U.S. elections this year whether its Trump’s Wall or amnesty for “Dreamers”, what happens in Mexico does affect directly.

If the U.S. does nothing, we can expect possibly millions of refugees flowing across our southern border instead of the typical thousands per year. The civil war raging has turned Mexico into a failed state at our door step. The real question for U.S. officials is how bad does it need to get before the U.S. will act?