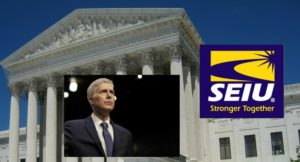 In another 5-4 partisan split, the U.S. Supreme Court voted to ban the practice of forcing public sector workers to pay union dues even if they are not members. For the last 40 years, public employees had union dues deducted from their paychecks even if they were not union members and even if they objected to the withdrawal.

Justice Samuel Alito wrote in the majority opinion. “This procedure violates the First Amendment and cannot continue. Neither an agency fee nor any other payment to the union may be deducted from a nonmember’s wages, nor may any other attempt be made to collect such a payment, unless the employee affirmatively consents to pay.”

Court’s four-decade-old precedent dealing with so-called “agency” fees, allowed states to require public employees to pay money supporting collective bargaining and political activities. And that is where they justices found problems with. The majority said that, forcing a non-member to pay for Union political actives violated the first amendment.

This decision is a major blow to organized labor in this country and a major blow to the Democrat Party. In 2016, this same issue came before the court but due to Justice Antonin Scalia’s untimely death, the Court deadlocked and the case was sent back to the lower court. Now with the confirmation of Neil Gorsuch the practice of forced union dues is history.