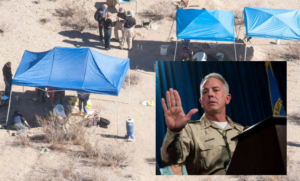 A source within @lvmpd telling me 6 dismembered bodies have been found in the desert area on East Lake Mead Blvd headed towards the lake! LVMPD has determined that MS13 is responsible. Source tells me @SheriffLombardo does NOT want this reported because of his re-election.

Las Vegas Metro Police Department released false and misleading crime stats for 2017 claiming the murder rate dropped by 10%. In fact, by our count and that of other news outlets, there were 169 murders in 2017 not 141. It appears that until a murder charge is produced in a case, LVMPD is not counting a gangbanger shot in the head as a murder in their crime numbers. Metro has also disabled the “LVMPD homicide open cases” webpage on their site.