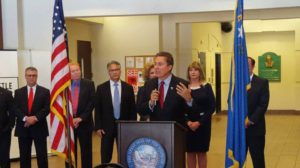 Roberson lost to Danny Tarkanian 2 years ago after outspending him 5 to 1 for CD3. Roberson is one of the most unpopular figures in the Nevada GOP according to base voters.

Roberson was responsible for authoring legislation in the Nevada State Senate to give drivers licenses to illegal aliens, common core schools and the largest tax increase in the state’s history.