WHY DID SISOLAK BUY 588K CHINESE MADE CV TEST KITS INSTEAD OF USA MADE?

WHY DID SISOLAK BUY 588K CHINESE MADE CV TEST KITS INSTEAD OF USA MADE? 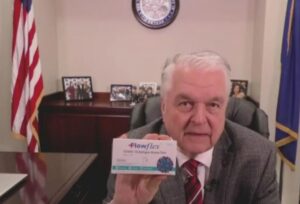 Yesterday, Nevada Governor Steve Sisolak announced the purchase of more than  588K Flowflex tests, made by ACON Laboratories from Federal CV relief funds to deal with the surge of the omicron CV19.

Abbott Labs’ BinaxNOW is made in the USA at factories in Illinois and Maine. Abbott says that it’s at-home tests detect the Omicron variant.

Florida’s based DemeTech, a manufacturer of medical equipment, is distributing Intrivo’s On/Go Antigen Test, which also includes an app that allows for storing and sharing test results.

Quidel’s QuickVUe and Sofia SARS Antigen tests are Made in California. Quidel announced their intention to open a 128,000 square-foot facility in north San Diego County.

But our Governor opted to buy Flowflex tests, by ACON Laboratories, a Chinese based manufacturer. ACON’s website clearly states

“Our state of the art manufacturing facility located in Hangzhou, China is ISO13485: 2016 certified, FDA registered, and has been inspected by US FDA.” 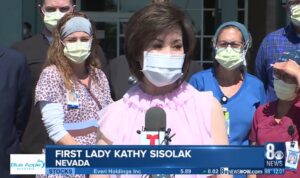 First Lady Kathy Sisolak and members of the Nevada COVID-19 Task Force will be on hand when the personal protective equipment is transferred to the state at University Medical Center tomorrow morning.

The gift comes from the Chinese People’s Association for Friendship with Foreign Countries.

A whistle-blower sent us a copy of a no bid contract between the Southern Nevada Water District and Kathy Sisolak’s company Hoggs, Ong and Associates, Inc.

Ong is Kathy Sisolak’s maiden name. The no bid contract which pays Sisolak $250,000 for financial consulting services was approved on July 15, 2021 by the Southern Nevada Water Authority Board which is made up almost entirely of Clark County Democrats. The contract disclosure attached below does not mention Ong is actually Mrs. Sisolak anywhere. Let’s be clear, money going to Kathy Sisolak is money going to Steve Sisolak.

The timing of the contract is raising questions about whether the no bid contract given to his wife for $250K was connected to Gov. Sisolak signing a law pushed by agency banning lawns?

“Since China gave the world CV19 they should be giving us the tests for free.”