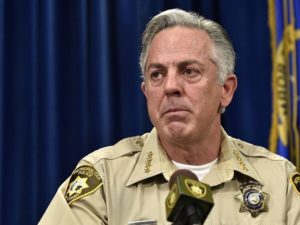 Yesterday, at a forum sponsored by US Senator Catherine Cortez Masto, Las Vegas Metro spokesman, Officer Jacinto Rivera said “The fear that’s going on, it’s not really warranted,” Riviera went on in Spanish saying “The purpose of this department, our focus, is violent crime. We will not become immigration enforcement officers.” Metro officer Jacinto Rivera today the audience that Las Vegas, North Las Vegas and Henderson police will not enforce federal immigration laws.

Last July, NEWSMAXTV LAS VEGAS reported the Department of Justice office of Inspector General’s report highlighted ten jurisdictions in the US violating federal law by failing to enforce immigration law. Clark County was one of the ten jurisdictions that have refused to turn over illegal aliens to ICE after being arrested by Metro Police, and instead released back into the community. According to the report, Clark County was listed on an ICE Declined Detainer Report in 2014 and 2015. Clark County was a beneficiary of DOJ grant funds under the Violence against Women grant program and as such may be in violation of Federal Code 8 U.S.C. 1373.

Metro Police reported an 88% increase in homicides and an increase of 50% in violent crimes in parts of town in 2016. Yet under Lombardo’s Sanctuary City policy here in Clark County, Metro Police release illegal aliens back into our communities that have been arrested for violent crimes if they can afford to post bail.