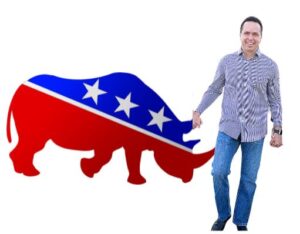 Either Nevada RINO’S are getting dumber or Democrats are getting smarter. If RINO’S spent as much time fighting Democrats as they do coming up with excusing for voting for tax increases, they might actually win once in a while. Predictable grifters Republican Assemblyman Tom Roberts and Assemblywoman Jill Tolles voted in the middle of the night for the $100 million Mining Tax. The predictable loser RINO Senators voted for it including, Keith Pickard, Scott Hammond, Ben Kieckhefer and Heidi Gansert. Mind you the Dems only needed 2 RINO Senators to pass the bill. The money went the rat hole know as Public Education.

So Dems successfully, without much effort, peeled away the four RINOS in the Senate. Everyone in both houses knew who the weak links were in the Republican Party. So it came as no surprise when they sold out their voters once again. What was surprising was the new and improved story they’re telling Republican voters why their screwed them over once again.

See, the Clark County Teachers Union went out and gathered signatures for a ballot initiative to raise Mining Taxes a whole lot. Then they went to the predictable RINO’S and told them they would actually be saving the Mining Industry from the big bad ballot tax if they just voted for the smaller Mining tax bill, in the middle of the night. And Dems’ extortion racket worked, even the Mining lobbyists were “begging” RINO’s to vote for the tax bill to save them. So now RINO’s are claiming they saved the day.

Mind you, nothing they voted for prevents the Dems from asking for more Mining taxes in 2 year or from breaking their word and moving forward with the ballot initiative. But what’s more shocking is the total incompetence of the RINO’s to get anything for their votes. RINO’s didn’t get any of the new found tax money to direct to our stake holders, like small business owners still reeling from the the lock downs. We got nothing. Sen. Hammond sold his soul for 1 year of funding for opportunity scholarships. Dems now know they got his future sell out vote.

The smarter move would have been to call the Dems’ bluff and vote no. We would have preserved our brand and forced the mining industry to spend money fighting the Ballot Initiative which would have driven rural voters out in record numbers in the upcoming midterm elections. And the Teachers Union would have been forced to spend their money fighting for the ballot initiative as well, money not spent on Dem lawmakers next year.

Even worse, the Dems’ extortion racket worked on the mining industry and predictably on the RINO’s. The Dems now have a new weapon in their arsenal to extort future tax increases. Maybe that’s why these RINO donors are also Democrat donors.