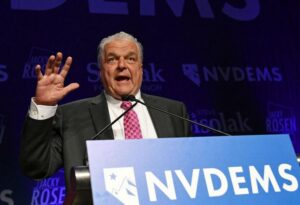 On March 17, 2020, when Gov. Sisolak ordered the entire State of Nevada shut down until April 1, 2020, he said it was to prevent Nevada’s medical system from being overwhelmed. Then on March 30, 2020 Sisolak ordered the entire State to remain on lock down until April 30, 2020, again siting his goal of flattening the curve preserve hospital capacity. Now, two days before the end of the second extension. Sisolak rope-a-dopes Nevadans with another last minute extension extension of his lock down for the next several weeks or maybe months more. To be determined.

Sisolak’s rope-a-doped flies in the face of science and known facts. Now that the facts are in, now that we know the disease only kills those frail and old, with a 99.99% survivability rate, with hospitals practical empty and begging for business to survive, the jig is up. The lock downs were never supposed to prevent the population from being exposed to CV19. The fact is we all will be exposed and either survive and not. The same goes for the flu every year. The Spanish flu still kills people around the world 100 years later.

Sisolak’s decisions have increasingly become more and more political. Why are Walmart and Kroger’s considered safe but small businesses are dangerous? Why are abort clinics allowed to remain open while churches remain closed. Two months after this crisis hit, 1.5 months since Sisolak shut down the economy, 400,000 folks unemployed and most still can’t even get through the phone or internet to file.

Sisolaks’s arbitrary and capricious authority to keep the Nevada locked down expires tonight at midnight. He no longer has the support of the people. It’s time Nevadans bury the dead and start living again.