According to court recorders, Republican Political consultant and Never Trumper, Lawra Kassee Bulen was arrested December 8, 2018 on “DUI and or controlled or prohibited substance, NRS 484C.110 and 484C.400. 1A”. Bulen posted a $2,000 bail, was released jail and ordered to return to court on April 4, 2019. Also known as, Kassee Bulen, she sits on the Las Vegas Metro Civilian Force Review Board who’s stated mission is ” L.V.M.P.D. Citizen Review Board is to serve as an independent civilian oversight agency to review complaints of misconduct against Metro peace officers and to review internal investigations done by the L.V.M.P.D.”

According to the Civilian Force Review Board Executive Director, Andrea Beckman, board members are expected to be law abiding and certainly not drug or alcohol addicts. Board members must pass extensive back ground checks. Director Beckman said she was shocked and surprised by the arrest and would investigate Ms. Bulen. Las Vegas Councilman Stavros Anthony who sits on the oversight board and recommends people to be appointed to the Metro Police review board called on Director Beckman to investigate and follow all proper procedures in this serious matter.

This isn’t Bulen’s first brush with the law. Bulen was arrested for “Assault causing bodily injury” according to data base records 360 obtained. 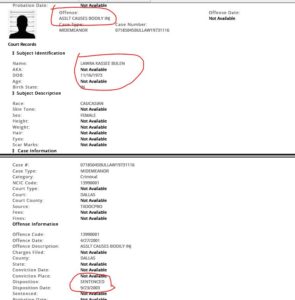