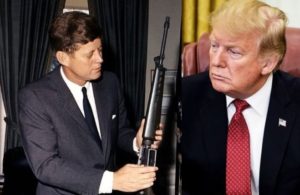 The federal government has a long history and tradition of defending of the civil liberties of its citizens against states’ abuses. President John F. Kennedy federalized 17,000 Alabama National Guard troops to protect black students who wanted to attend nine previously all-white Birmingham schools across the state of Alabama after the Governor violated the children’s civil rights. President Lincoln argued that the rebellious southern states were violating the rights of U.S. citizens living in their territories as just cause for the Civil War. The U.S. Department of Justice brings lawsuits all the time against states, local police departments and other political subdivisions to defend the civil liberties of American citizens. In fact, the DOJ has a civil rights division.

Now there is a new threat to our civil liberties coming from numerous states across the country. One party ruled State Legislatures, like Nevada, are openly violating the civil rights of its citizens with new gun laws that directly infringe on rights of law abiding citizens turning them into criminals.

Stripping a citizen’s freedom and locking them away for simply selling their firearm to their neighbor or friend violates the U.S. and Nevada constitution and violates basic human rights. Red flag laws (pre-crime) that allow states to circumvent due process and allowing the government to seize and hold personal property with no jury trial, with no proof of guilt, with no mental health expert testimony, no right to a lawyer, with no evidence whatsoever, other than hearsay from a neighbor or ex-spouse claiming you’re nuts, is a direct threat to our civil liberties. Progressives want to use Red Flag laws as a pretext to sending men with guns into your house to seize your guns. In California, these gun grab seizures have already resulted in the deaths of innocent people.

We are not a democracy where a majority can pass laws that violate citizen’s rights. We are constitutional republic where our rights are protected by the government. That is supposed to be the purpose of government, to protect our freedoms, not infringe on them.

We need President Trump’s help right now. We need the President to fight these laws and protect our rights. I am calling on President Trump to use the power of the DOJ to sue every state that tries to use these unconstitutional gun laws to violate the civil liberties of “American citizens”. You have a duty Mr. President to defend us.