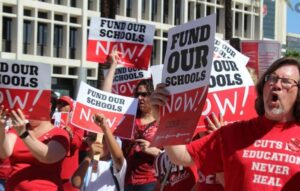 Oct. 12, 2020
Rob Lauer Political Reporter
.
The far left Clark County Education Association (the teachers’ union) donated to the Clark County Republican Central Committee some $2,600 back in April 2020 of this year. Considering that the CCRP barley raised some $14,000 as of April 2020, $2,600 was their largest single donation for the entire first reporting period. 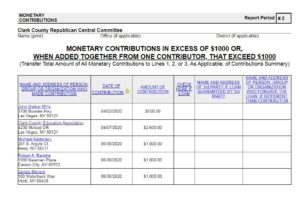 99% of Clark County Education Association donations went to Democrats along with a few FAKE Republicans, according to their C%E donation report. They gave $10,000 to Gov. Sisolak in 2016. They are big donors for Joyce Woodhouse, Aaron Ford and other Dems. Over the course of the last 8 plus years, the group has donated $1,534,490.97. The only person listed directing the group is a New Mexico lawyer named Steve Sorensen.

The teachers’ union support the lock downs, radical left school curriculum and they’re campaigning to raise our property taxes and other taxes to fund the Clark County School District. According to sources, former Republican Senator Michael Roberson is behind the push to raise taxes for “Education”.