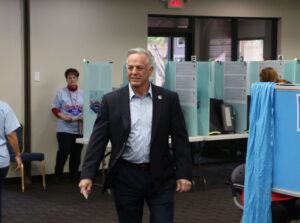 It was almost one year ago when Sisolak’s lawyers argued in federal court in favor of his mask policy,

Today, Nevadans can breathe again. Today is the official end of the most corrupt and incompetent governor in Nevada’s history. Endless lockdowns that killed 33% of all small businesses, a dozen kids committing suicide while locked out of school, families watching their loved ones die on a zoom call, all while the Raiders’ stadium and Resorts World construction were allowed to continue because his wife was paid. His wife got no bid contracts, and he used NV tax dollars to buy two new private jets while failing to fix the unemployment system, leaving thousands of folks he called “nonessential” to fend for themselves without a job.

Sisolak banned potentially life-saving drugs and forced American citizens to choose between a vaccine or their jobs. Sisolak fast tracked a CV testing license to his good buddies that had a 96% failure rate winding up under federal investigation. Sisolak forced free people to wear a mask everywhere he knew won’t stop CV19 up to May of this year.

But he found $8.5 million to give a Chinese Communist party member (no I’m not talking about his wife) to build the third largest Lithium mine in Nevada, which we must revisit.

His failure was so bad that he never ran a single TV ad about his CV-19 leadership. Instead, Sisolak tried to smear Governor-elect Lombardo with lies and abortion fears. But Sisolak hurt too many average people. He never even tried to apologize. Average people were hurt by Sisolak’s record on crime, his 50th in education record, his 50th in unemployment record. All of this was too much for people to bear. A Democrat losing as governor of Nevada is a political earthquake.

Today we rejoice that Sisolak met his fate.

“Of course, this victory wouldn’t have been possible without the tireless work and patience of my incredible family, staff, supporters, and volunteers. Thank you for fighting for the future of our state alongside me during this campaign.

“Nevada, from the bottom of my heart, thank you for the great trust you have placed in me. Donna and I can’t wait to get to work for our state in Carson City.”