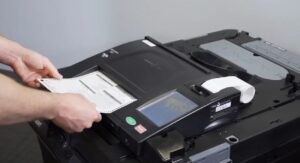 The Election system tabulating software in Antrim County, Michigan, shifted “6,000 votes to Biden and Democrats that were meant for Trump and Republicans.” Antrim County Officials rectified the issue after ballots were recounted by hand.

One Michigan county clerk caught a glitch in tabulation software so they hand counted votes and found the glitch caused 6,000 votes to go to Biden + Democrats that were meant for Trump and Republicans. 47 MI counties used this software. All must check now! pic.twitter.com/21AXyJZDZi

But 360 News has uncovered that Clark County is using the same software system developed by Dominion Voting, according to the company’s own website.  https://www.dominionvoting.com/about/ 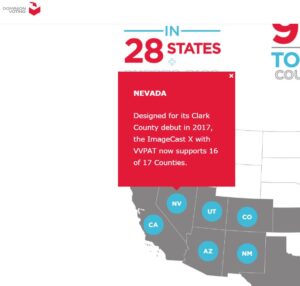 According to news reports, the company updated the software the night before the election

The companies “uploaded something last night, which is not normal, and it caused a glitch,” said Marcia Ridley, elections supervisor at Spalding County Board of Election.

What did they upload? Who knows…

“That is something that they don’t ever do. I’ve never seen them update anything the day before the election,” Ridley said. Ridley said she did not know what the upload contained.

Gabriel Sterling, voting system implementation manager in the secretary of state’s office, told reporters that the issue likely was a dataset that got uploaded to the systems, but that they don’t know for certain. He did not say if the dataset was uploaded by the voting machine vendor.

According to the company’s website, the software is being used in every major swing state election.

ABC News Reported Congress held hearings concerned that components in their hardware had been manufactured in Asia. https://abcnews.go.com/Politics/wireStory/voting-machine-vendors-scrutiny-congressional-hearing-68180561