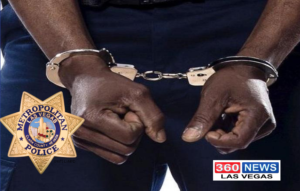 It all started on March 22, 2019 when U.S. Marine Veteran and a CCW holder, Steve Sanson, left family court where he volunteers as a court observer and who has advocated for major reforms to the family court system, was pulled over by a Las Vegas Metro Police Officer right as he pulled out from the Clark County Family Court building. According to Sanson, (see his full statement below) the officer pulled him out of his car, handcuffed him and sat him on the sidewalk without cause. The Officer requested backup and three officers rifled through Sanson’s car without his permission or probable cause. The officer then verified his CCW and gun were legal, but still continued to hold him in cuffs on the sidewalk for over an hour. Eventually the three officers uncuffed Sanson, issued him a speeding ticket and released him. Steve Sanson is an outspoken Black Marine Veteran Activist and a CCW holder.

Sanson then filed a formal complaint with the Las Vegas Metro Police Civilian Review board. But the Executive Director of the Citizen Review Board, Andrea Beckman, issued a letter refusing to review Steve’s formal complaint out of fear of negative publicity. Nevada law, NRS 289.380, requires counties with more than 150,000 citizens must have a citizen’s force review board in order to “review and recommend discipline for officers.” 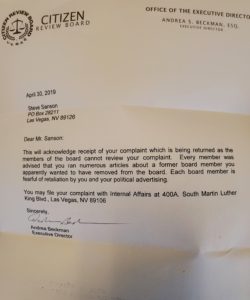 Executive Director Citizen Review Board, Andrea Beckman in this letter is referring to a couple stories 360 News Las Vegas published about former Board Member Kassee Bulen, who was arrested back in December 2018 on Drug and Alcohol charges, resigning shortly after the story came out. Bulen has a trial scheduled for June 2019.
.
According Sanson, a Federal lawsuit is being prepared against the Civilian Review Board and LVMPD for violating his civil rights over the chain of events. 360 reached out to Director Andrea Beckman multiple times for comment but so far she has refused to reply. The Board members including, Ms. Beckman, are appointed by Las Vegas City Council members like Stavros Anthony and Clark County Commissioners. Supposedly they undergo extreme vetting. But after Kassee Bulen’s criminal arrest while on the board went unnoticed for months and she was allowed to remain on the board until the news story broke in March 2019, the program’s credibility is now being called into question. The board members are screened by Las Vegas Metro Police raising questions of conflict of interest.
Statement of Steve Sanson