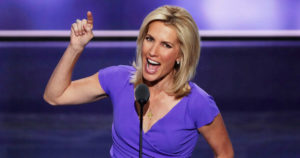 When Eric Bolling was suspended from FOX News a couple of weeks ago many of his supporters thought he might survive. He even filed a lawsuit against one of his accusers for millions this week. But FOX News already made up their minds it appears.

According to insiders at Fox News, Ingraham is in talks currently for her own show to replace Bolling. According to LA Times sources, “Ingraham is seen as a compatible fit between the network’s conservative prime-time hosts Tucker Carlson and Sean Hannity. Under that scenario, the roundtable show “The Five” — which moved to 9 p.m. Eastern time when the network had to shuffle its program lineup after Bill O’Reilly exited in April — would move back to its original time slot of 5 p.m. Eastern to make room for Ingraham.”

Ingraham has been a rock star on the radio and is a staunch Trump supporter. She was even floated as a possible White House Spokesperson.

Every FOX News Host that has been suspended for sexual harassment like Bolling, has ultimately been fired, including Bill O’Reilly and Roger Ailes.