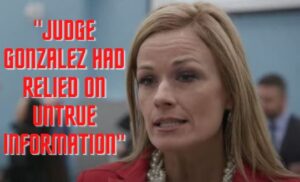 Last night the Real Clark County Repub Party, led by Chairman Jesse Law, held a meeting at the Ahern hotel with over 500 people coming together. The meeting was harmonious and productive. The Fake Clark Republican Party, led by State Sen Carrie Buck and Silberkraus, held a Zoom Election at the same time. The Fakes sued Jesse Law and lost their lawsuit just days ago. The Judge ruled the meeting where Jesse Law was elected Chairman was lawful and she dismissed the case with prejudice finding that the Fakes lied to the court. “Judge Gonzalez had relied on untrue information”.

Judge Johnson ruled the Fakes lied under oath at the previous hearing where they claimed Metro had ended the meeting and it was not in recess. But Metro Police sent a letter denying that ascertain and the video from the meeting clearly showed the meeting was put into recess because time ran out. The Fakes didn’t want hundreds of new Pro-Trump Republicans to become members and vote for Jesse Law. See the court order below.