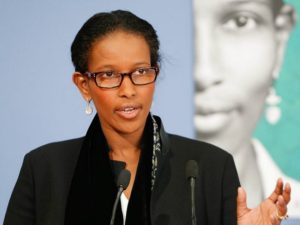 Last week MGM’s CEO Jim Murren pledged to match donations to civil rights groups, including the Southern Poverty Law Center which recently labeled AYAAN HIRSI ALI, an anti-Mulsim Hater. But Ali is a Muslim woman fighting for civil rights in Muslim countries, including against female genital mutilation. SPLC has refused to call out any Muslim extremist groups tho including ISIS. But they consistently call groups they simply disagree with extreme. One label stands out ‘Constitutional Extremist.” Is that possible?

They labeled the Family Research Council, a family values group, a hate group for simply wanting the IRS rule restricting churches from publically speaking out on political issues repealed. They also labeled the Federation for American Immigration Reform (FAIR), a hate group for simply supporting limits on immigration and ending sanctuary cities. FAIR has regularly published the fiscal costs of illegal immigration on a national and state by state basis.

The SPLC is currently being sued for defamation for listing people and groups they simply disagree with hate groups.

Ayaan Ali, a recent victim of defamation by SPLC, wrote this op-ed in response to being labeled an anti-Muslim extremist by SPLC.

I am a black woman, a feminist and a former Muslim who has consistently opposed political violence. The price for expressing my beliefs has been high: I must travel with armed security at all times. My friend and collaborator Theo van Gogh was murdered in broad daylight.

Yet the S.P.L.C. has the audacity to label me an “extremist,” including my name in a “Field Guide to Anti-Muslim Extremists” that it published on its website last October.

In that guide, the S.P.L.C. claims that I am a “propagandist far outside the political mainstream” and warns journalists to avoid my “damaging misinformation.” These groundless smears are deeply offensive, as I have dedicated much of my adult life to calling out the true extremists: organizations such as Al Qaeda and ISIS. Yet you will look in vain for the S.P.L.C.’s “Field Guide to Muslim Extremists.” No such list exists.

Like neo-Nazis, Islamic extremists despise liberalism. They deny the equality of the sexes, justify wife-beating and, in some cases, even the enslavement of female unbelievers. The Islamic State and groups like it regularly murder gay people in the most heinous ways. Islamic extremists are also virulently anti-Semitic, like the Nazis before them. And like today’s American Nazis, they brandish swastikas, chant slurs and peddle conspiracy theories.

The terrible consequences of Islamic extremism are on display on a weekly basis around the world. In the days after Charlottesville, five men in Barcelona used a van and knives to kill 14 and injure scores of innocent people. Another Islamic extremist went on a stabbing rampage in Finland. In wealthy societies like the United States, most plots to kill in the name of Islamist supremacy are foiled. But poorer societies in the developing world lack the means to do that, which is why the majority of victims of the extremists are in countries like Afghanistan, Iraq, Nigeria, Pakistan and Syria.

It is not surprising that, when I point out such facts, I am viciously attacked and threatened by those who are dedicated to Islamic extremism. But it has always struck me as odd that so many supposed liberals in the West take their side rather than mine, as happened three years ago, when Brandeis University rescinded their offer to me of an honorary degree. I would have expected a civil-rights organization supposedly committed to justice to speak out against those who would oppress women, gays and people of other faiths. But the S.P.L.C. has nothing to say about Islamic extremists; only about their opponents.

Ali’s comments were published in the NY Times.