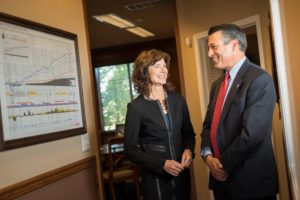 A Nevada District Court Judge this week rejected a lawsuit brought against Republican State Senator Heidi Gransert who NPRI alleges violated the Nevada State Constitutional for working for the Governor’s office while also serving as a State Senator.

NPRI said they will appeal to the Nevada Supreme Court.

“Gansert’s continued employment in the state’s executive branch, as Executive Director of External Relations for the University of Nevada, Reno, puts her in direct violation of Nevada’s Separation of Powers clause, now that she is also serving in the state senate” explained CJCL Director Joseph Becker.

“As a senator, she can simply not continue her employment in the executive branch without violating this clearly worded constitutional provision.”

It’s a violation that was also recognized by now-Governor Brian Sandoval back in 2004, when he wrote in an Attorney General Advisory Opinion that the “Nevada Constitution bars any employee from serving in the executive branch of government and serving as a member of the Nevada State Legislature.” (Emphasis added).

The reason for this Separation of Powers provision is simple, according to Becker. It was designed to preserve the independence and integrity of each branch. Having a legislator make decisions that might directly benefit the position they hold in another branch of government creates a clear conflict of interest.

In fact, this conflict seems especially demonstrable in the case of Gansert. One headline in the Reno Gazette Journal, for example, described her election to the Senate as a “windfall for higher education.” After Gansert announced her intention to run for the senate, there was no shortage of speculation that her current role at the University would result in her moving forward legislative priorities that would benefit her executive branch employer.

“This is the exact type of scenario the constitutional provision was designed to prevent in the first place,” explained Becker, “where a sitting executive branch employee uses their elected position in the legislative body to lobby for other branches of the government.”

The powers of the Government of the State of Nevada shall be divided into three separate departments,—the Legislative,—the Executive and the Judicial; and no persons charged with the exercise of powers properly belonging to one of these departments shall exercise any functions, appertaining to either of the others… [Emphasis added.]

“As Sandoval’s 2004 Attorney General Advisory Opinion demonstrates, this is a longstanding problem in Nevada government,” said Becker. “The provision is an important check on government power and corruption — unfortunately, it has been long ignored by members of both political parties.”