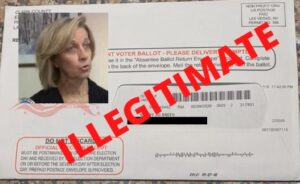 This primary election may possibly be the most corrupt and illegitimate in our lifetime. From stripping us of our right to vote in person, as Nevadans have done successfully since its inception some 155 years ago, to completely corrupted voter registration rolls, Nevada now faces a true test of its system.

It all started back on March 24, 2020 when Nevada Secretary of State Barbara Cegasvke went along with Democrats, against President Trump’s wishes, and ordered all the counties to hold exclusively vote-by-mail elections. But then 360 found out that Cegaske’s order was not actually an order but a secret deal with county elections departments. As first, Cegasvke’s office admitted they had no legal basis to allow the exclusive mail in ballot elections. But after they were sued they hung their decision on an obscure law they dug up and some Obama appointed judge went along with the scam.

Even the RNC and NVGOP sued the Clark County elections department for concealing their plan to spend some $300K of tax payer money on the mail-in-election violating the open meetings laws. Today there is a new crisis of confidence among Nevada Republican voters. Tomorrow will we see the winners of this election as legitimate elected leaders?