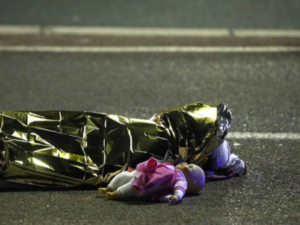 Following the murders of some 84 unarmed civilians in Nice France including 10 babies, where we saw again police (men with guns) stop the terrorist. But what if the civilian’s like in Israel had firearms as well how many lives would have been saved. In the end, you are the first responder during an attack whether criminal or terrorist. In Israel all citizens receive firearms training and all citizens can carry firearms including yes “Assault rifles” everywhere.

It’s time, we the people stand up and take back our God given human right to defend our future, our families and our freedom. We must declare boldly that its a human right to defend one’s life PERIOD. that means, for all you people who went to public schools in Clark County, the right to defend yourself does not come from the state but from God. That means the Government has no authority to restrict you from exercising that right or the government is in fact violating your rights.  The purpose of the Government is to protect and uphold your rights. It’s a gross violation of human rights for governments to restrict your right to self defense.

We cannot let the brainwashed sheep of the world controlled by the Liberals restrict our human right to self defense through courts and elections ever again. We must declare and claim our rights. And we must not apologize for the crazies who use guns or trucks to harm people.

Liberals have declared you have no right to self defense through the 9th Circuit and other courts. Wrong, It’s a human right and we must push that right globally. Every American, every Frenchman, every German, every human has the right to self defense. That means carrying a firearm under your shirt or in your purse. Governments have no right whatsoever to restrict that God given right from their law abiding citizens. France has some of the most extreme gun control in the world yet the terrorist last night had a gun and a truck. He killed 84 helpless unarmed people with a truck.  Obviously we are not going to outlaw delivery trucks. But it proves once again that trucks, guns, cars, planes and bricks are not the problem. The problem is human hearts filled with hate. And only men (and some women) with guns can stop hate. Only slaves are unarmed by governments.