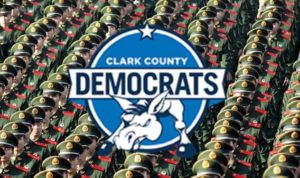 The Clark County Republican Party scrapped by paying their rent at their one office last month, their unmanned office. They raised zero dollars last quarter, accept for the Chairman’s donation to pay for the empty office. The Clark County GOP is deeply divided and led by a weak inexperienced Chairman. A Chairman who has divided the party even more if that was possible. A Chairman who refuses to defend our core values. A Chairman who supported a primary against the Republican President of the United States.

Last week the unmanned office was vandalized with violent hate speech and Chairman Sajdak did nothing.

Last week the Silverton Casino demanded a gun free zone at the CCRP meeting and Chairman Sajdak did nothing.

The Dems passed gun grab laws, and Chairman Sajdak did nothing.

The Dem controlled Clark County Registrar Voters Office allowed 50K non-citizens on the voter roles, and Chairman Sajdak did nothing.

The Dems pushed for transgender bathrooms in the Clark County Public schools and Chairman Sajdak does nothing.

I mean nothing, not a tweet or press release, nothing.

On the other side, is an organized and disciplined political war machine, that has over 13 campaign offices, a full time paid professional staff with over $300,000 in the bank. Yes they have their internal debates between the moderates and the Bernie Sanders Socialists, but at the end of the day everyone toes the line and everyone knows their job.

After last year’s election, Dems now control every major office in the county government. They hold every State Constitutional office accept the Secretary of State. The hold a super majority in the State Assembly and one vote shy in the State Senate. Harry Reid has built a powerful political war machine over three decades. The Clark County GOP is in real danger of losing all power in the state if they don’t get their act together now. It wasn’t long ago when the NV GOP controlled all the major state offices and most of the federal offices in Nevada.

The Clark County GOP are the bad news Bears playing the New York Yankees aka the Clark County Dems. But not all is lost. The CCRP has a strong bench with seasoned people who are eager to fight and win. Chairman Sajdak just needs to get out of the way before its too late.