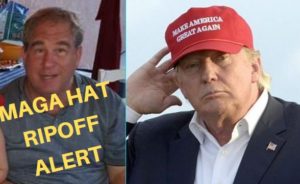 The CCRP rents tables to vendors to sell all kinds of items at their bimonthly meetings. Recently, some vendors have been selling knockoff MAGA hats and T-shirts. Trump MAGA merchandise sales benefits the Trump reelection efforts directly, knockoffs benefit the Chinese.

Local Las Vegas Republican Trump Supporter, Chris Dyer, introduced a resolution at the meeting Tuesday calling for a ban on the sale of any knockoff Trump MAGA merchandise. The Clark County Republican Party, led by Chairman David Sajdak, rejected the Pro Trump resolution and actually voted in favor of allowing the sale of Chinese Rip Off MAGA merchandise to continue at their bimonthly meetings.

They directed us to their official website which states:

“the look and feel of the Site, including all page headers, custom graphics, button icons and scripts, is the service mark, trademark and/or trade dress of Trump Make America Great Again Committee and may not be copied, imitated or used, in whole or in part, without our prior written permission. All other trademarks, registered trademarks, product names and company names or logos mentioned in the Sites are the property of their respective owners. Reference to any products, services, processes or other information, by trade name, trademark, manufacturer, and supplier or otherwise, does not constitute or imply endorsement, sponsorship, or recommendation thereof by us.”