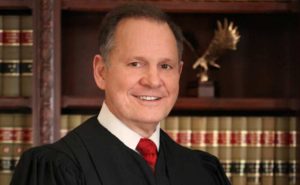 According to the attacks on Roy Moore, some forty years ago he dated a 14-year-old girl when he was 31 years old. He did not rape her. He did not force himself on her. When did we as a society lose the concept of forgiveness and redemption?

According to all accounts, Judge Roy Moore has lived the last forty years of his life with honor and the courage of his convictions. Judge Moore has been married to his wife, Kayla Moore, for more than 30 years, raised a family and led a life in public service to his community.

So even if Judge Moore did the things he is accused of, when do we as a society forgive? Is someone who makes a mistake forever tarred by their errors? Is redemption a lost noun in the American vernacular?

In 1999, Judge Moore defeated a Karl Rove backed opponent, Harold See, for Chief Justice of the Alabama Supreme Court. in 2001, Moore made national news when he installed a 2-ton monument of the 10 Commandments on the court footsteps. This angered liberals who sued and obtained a ruling ordering it removed. Moore ignored the Federal Court order and was removed from office only to run again and win in 2012.

In 2015, Judge Moore again defied liberals by stating publicly, that judges and public officials in Alabama should ignore a federal court decision on same-sex marriage. On January 28, 2015, the Southern Poverty Law Center filed a judicial ethics complaint against Moore. On September 30, 2016, Moore was found guilty of all six charges and suspended for the remainder of his term.

On April 26, 2017, Moore, who had been suspended from the Alabama Supreme Court since September 2016, resigned as Chief Justice in order to run for the U.S. Senate seat vacated earlier by Jeff Sessions, who left the Senate to become U.S. Attorney General.

Moore once again beat the Establishment Republicans’ choice, Luther Strange, in a primary after some $30 million spent by his opponents. Now with less than a month until the general election, new attacks have emerged against Moore accusing him of dating young teenage girls when he was in his early thirties.

As a hero to social conservatives and the embodiment of everything liberals stand against, Moore denied charges of sexual misconduct some 40 years ago. Moore’s real sin in the eyes of liberals is, supporting Judeo Christian values like the ten commandments and traditional marriage.

So the real question here is do we as a country believe in redemption anymore? And if not who then is qualified to run for office? Who hasn’t sinned in their lives? Are all of us now doomed to second-class citizenry no matter how many years we work diligently after our sins to redeem our public character?

Or is redemption only reserved for liberal Democrats today?