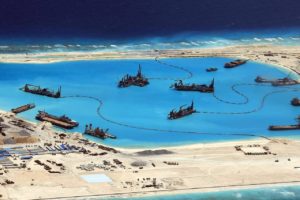 Over the weekend the Chinese government agreed to release a US Navy drone they seized illegally in international waters. China has dramatically expanded its construction of artificial islands in the South China Sea over the past couple of years and expanding territorial claims by Beijing in the region, US officials said. China has expanded the artificial islands on submerged reefs known as the Spratlys  by as much as 2,000 acres of land, according to US government sources. China has constructed a naval harbor, a 9,000 foot runway and posted a military garrison on the manmade island. The island is right in the middle of international ocean shipping lanes protected by international law.

China’s actions directly interfere with the free and open right of every human on earth to travel the ocean. China cannot be allowed to shut down and control international shipping lanes. And the Hague ruling in August of this year confirmed that, finding that China’s territorial claims in the region have “no legal basis” under the U.N. Convention on the Law of the Sea. China claims most of the South China Sea, including islands more than 800 miles from the Chinese mainland, despite objections from numerous American Allies and trading partners, including the Philippines, Malaysia, Brunei and Vietnam. 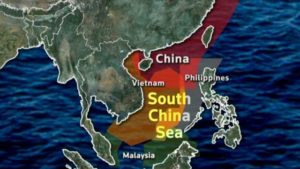 However, while the ruling is considered legally binding, there is no mechanism to enforce it except through foreign trade sanctions. After decades of China stealing US business trade secrets using cyber warfare hacking, stripping US factories and shipping them wholesale overseas and replacing American workers with low wage Chinese workers, then selling us products with devalued Chinese dollars and contributing to the destruction of over 7 million US manufacturing jobs this is the last straw. Telling the US and the world where they can and cannot sail their ships is completely unacceptable and must be dealt with by the world. Allowing any nation state to build a militarized artificial island in the middle of international shipping lanes and making territorial claims poses a direct threat to the entire world. Obama’s weakness invited China’s unchecked bullying of its neighbors and our allies.

So this week when China seized a US Navy drone off its illegal militarized manmade island, President-Elect Donald Trump made it very clear there’s a new sheriff in town. Trump’s first tweet attacked China for stealing the US drone.

Then after China announced they would return the drone he tweeted a second response “let them keep it”.

He left out the “F-Them” part trying to be Presidential but they got the message. Then China fired back on “state run” TV claiming they just found the drone like someone walking on the street and was curious. Of course US “state run” TV news claimed Trump’s tweets had nothing to do with China’s expedited release of the drone.

President Trump must lead the US and the World together to force China to give up its man-made island and illegal territorial claims through economic force. Let me be clear, in no way do I support any military confrontation with China and its 2 billion people. The islands are not worth loosing a million American lives over, but they are worth loosing millions of Chinese trade dollars over. If the US led an effort to shut China’s trade down thru sanctions and enforced those sanctions with its Allies, including seizing Chinese assets to pay US workers and companies for their losses then China would again be isolated. The US opened China up and the US can close China down. I am calling for economic warfare on a grand scale never used before to compel a giant nation state to comply with international laws they agreed to without firing a shot. As a conservative, I believe the purpose of government is to protect, defend and expand human liberty.

President Trump must lead the world against China’s unchecked aggression that President Obama’s weakness invited. Peace through strength always works when you have a credible leader with the moral fortitude of their convictions leading.